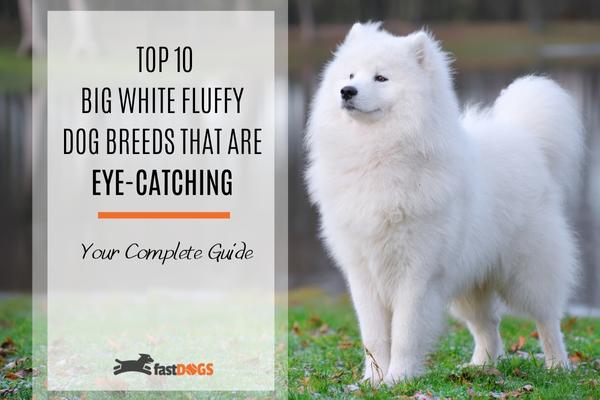 Although all dogs are awesome, there is something unique about a big white fluffy dog. And, while we all love to admire how charming these tail-waggers are, it's equally crucial to remember that each coat has a function beyond impressive appearance.

A large white fluffy dog's beauty and elegance constantly draw admiration, which makes people want to reach out and feel their thick and fuzzy snow-white fur.

In this article, we'll go over some of the breeds you should consider if you're fascinated with the attractive looks of a huge white fluffy dog.

What Makes a Dog Fluffy?

Before we look into the different breeds, it’s crucial to understand what makes these dogs fluffy and why.

The majority of fluffy dogs have a double coat — referred to as the outer and undercoat — giving them their fluffy appearance. While it looks amazing, it’s also super beneficial as it protects them from the cold.

And, because of their coat, fluffy four-legged friends tend to be heavy shedders, especially during transitional seasons. However, there are exceptions to this generalization — some fluffy dogs don’t shed much, which makes them suitable for those with allergies.

Keep in mind that a fluffy dog can be high maintenance — constant grooming is important — such as frequent brushing. This not only helps manage shedding, but also prevents fur from becoming matted.

Ready to be overwhelmed by big fluffy dogs with cloud-like coats? Here are 10 popular big white furry dog breeds you should know about. 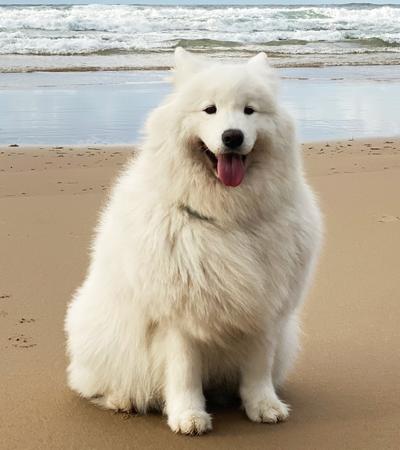 The stunning Samoyed big white fluffy dog is widely recognized. This canine can endure cold or wet weather thanks to its long, white, fluffy coat. It’s easily trained and has strong loyalty qualities. To prevent excessive shedding, regular grooming is essential. They have an average height of around 23 inches, and males can weigh up to 65 pounds.

Samoyed puppies have a cuddly, teddy-bear appearance, yet possess a persistent personality. These dogs aren’t very disciplined and frequently act up if left on their own for too long. However, they’re also kind, lovable, and great with kids, and they continue to be energetic as they mature. 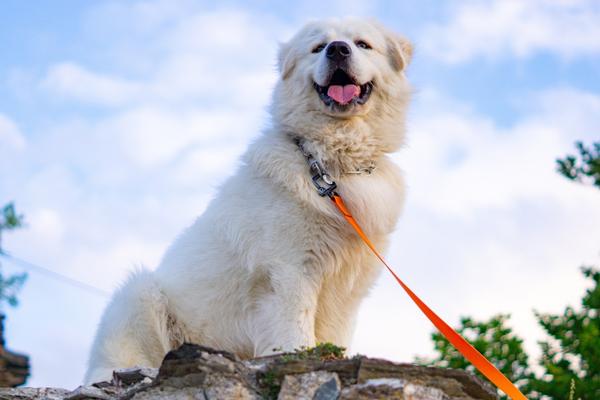 The Great Pyrenees has to be the big white fluffy dog. These dogs are physically enormous, standing over 30 inches tall and typically weighing in excess of 100 pounds, in addition to being stunning and robust.

They’re known to be gentle giants and forever faithful to their families. That said, the Pyrenees can also be highly independent and headstrong. This comes from their working dog background — where they were used to protect livestock in the mountains. 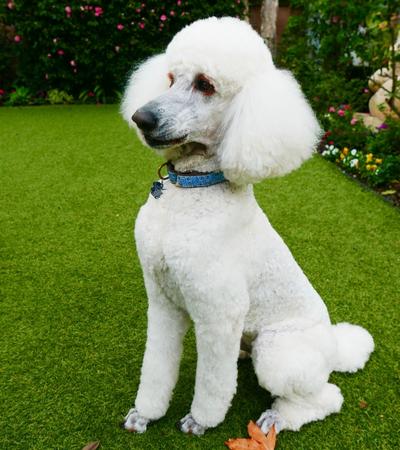 Due to its minimal shedding reputation, Standard Poodles are ideal for owners who suffer from allergies. This breed is well-liked, not just among affluent ladies because of its exquisite appearance, fluffy hairstyle, and pleasant disposition. The Poodle is an energetic and cheerful breed that fits in with almost everyone.

This fluffy big white dog is well-known for being extremely intelligent and takes great pleasure in being trained, making it a fantastic dog for newbie owners. They weigh up to 70 pounds (males) and stand roughly 15 inches in height (shoulder). 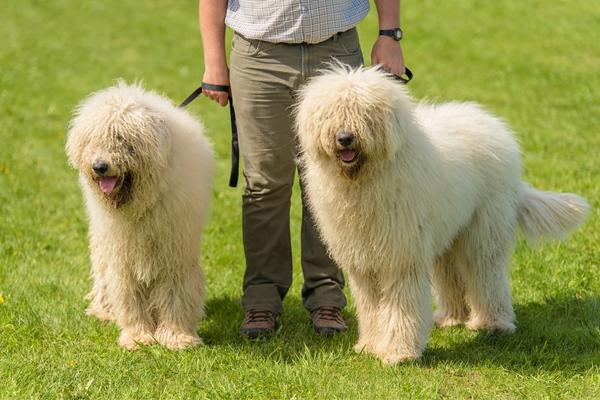 The Komondor's body has a distinctive appearance — its self-cording white coat. With long dreadlocks hanging over their faces, you would never believe this breed were once watchdogs. However, they were initially used to guard sheep, and thanks to their white, shaggy ‘sheep-like’ coat, they blended in well.

With a big build, 28 inches tall, and roughly 110 pounds in weight, the Kom is easy to train and makes an ideal family dog. Yet, they can be overprotective, so they require a lot of socialization before they stop seeing strangers as a threat. 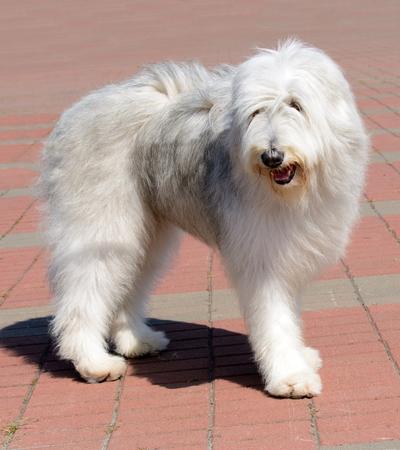 The Ukrainian Shepherd dog, also known as the South Russian Shepherd, is a large fluffy white dog with a domineering personality. While their size can be overwhelming, they can also be affectionate and placid pooches, particularly with their pack. When fully grown, they can weigh more than 100 pounds and stand 24 inches tall.

Due to their size and powerful personalities, this breed is better suited to those who know how to handle dogs. Shepherds need a strong leader to keep them in check, otherwise they will walk all over you. 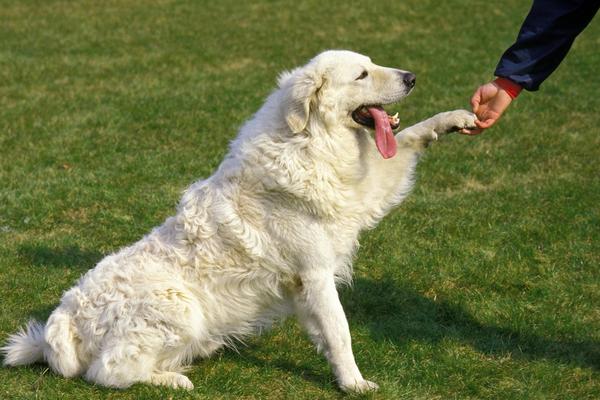 The Kuvasz resembles a Clumber Spaniel but is significantly larger, standing 30 inches tall and weighing up to 115 pounds. They were originally bred to defend livestock from wolves in Hungary. Farmers could tell them apart from predators because of their brilliant white coats.

Kuvasz is a bold and strong dog devoted to their owners, yet despite their intelligence, they may be tough to train. Plus, this breed isn’t suitable for tiny residences or yards — Kuvaszok must have room to roam, otherwise they become bored and destructive. This is a dog that requires exercise and stimulation. 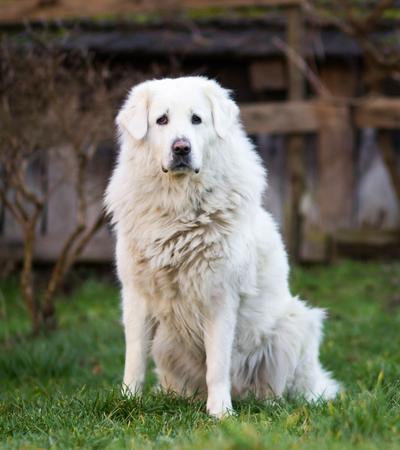 Slovensky Cuvacs are another breed originally trained to guard livestock and have retained those qualities throughout their lives. Their fluffy coat sheds a lot, but they don't need much in the way of maintenance. These dogs have a big fluffy stature, with an average height of 26 inches at the shoulders and weight in the region of 68-97 pounds.

The Slovensky Cuvac is a large dog that resembles the Great Pyrenees. For those they care about, they possess a fierce protective nature. However, the Cuvac isn’t the smartest choice for inexperienced owners, requiring extensive training to become well-adjusted in the family. 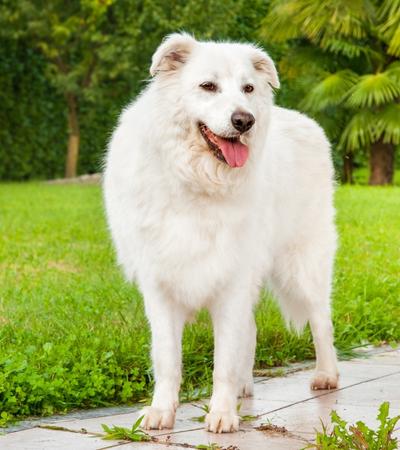 The Maremma Sheepdog is native to Maremma and Abruzzo, two regions of Italy. This snow-white dog, which looks like a Retriever, is used for herding. As an enormous breed, you can expect to reach a height of around 28.5 inches and weightwise, 100 pounds.

While they are big and robust dogs, they have calm, independent personalities. They don’t require the owner's constant presence and tolerate being alone for lengthy periods. You should prepare for a dazzling spring or fall "blow out" of their fluffy white coat — which can be minimized by routine brushing. 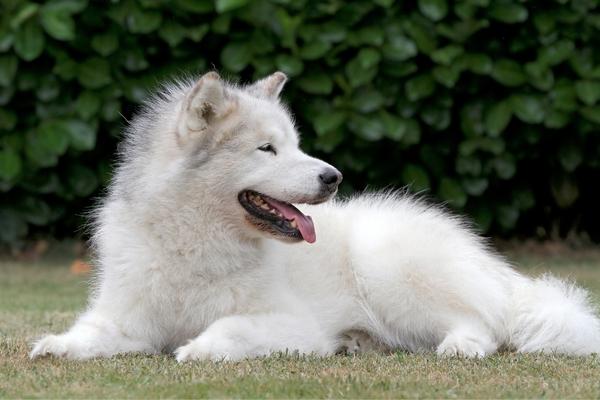 The White Alaskan Malamute is a perfect example of a large white fluffy dog. Its furry coat allows it to survive extreme weather, which, in turn, allows it to remain agile when performing various tasks like hiking and sledding across snowy terrain. They weigh roughly 85 pounds on average and stand 25 inches tall at the shoulder.

With an energetic and headstrong nature, these dogs can be challenging for a family. Plus, they shed an awful lot. And, the Malamute requires lots of training before they develop appropriate behavior. Although not recommended for first-time dog parents, seek the assistance of an experienced owner, if it is the breed you want. 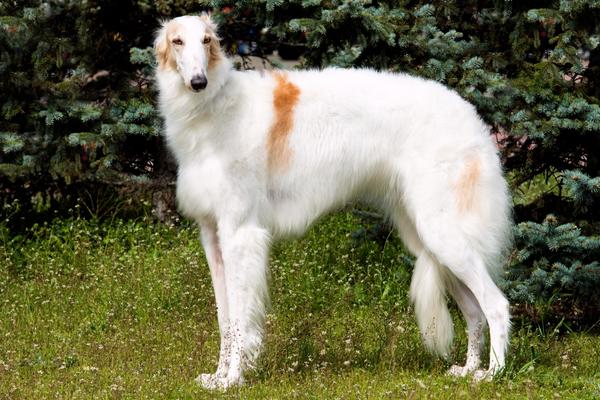 Also known as the Russian Wolfhound, ‘borzói’ means fast. And this hound lives up to its name as one of the speediest canines in the world — often used in greyhound races today. They stand around 28 inches tall and weigh over 105 pounds on average.

The Borzoi is extremely smart, patient, and gentle. They adore their owners and will not be aggressive towards them unless they are mistreated. They also get along well with children if they have been around them since they were puppies.

If you've decided to adopt a big white furry dog with a cloud-like coat — bear in mind that they may not be low maintenance. Plus, you must keep them mentally and socially engaged from an early age.

Yet, by choosing a big white fluffy dog, you’re on your way to having a magnificent canine companion who will turn heads at the doggy park.
←Previous post Next post→