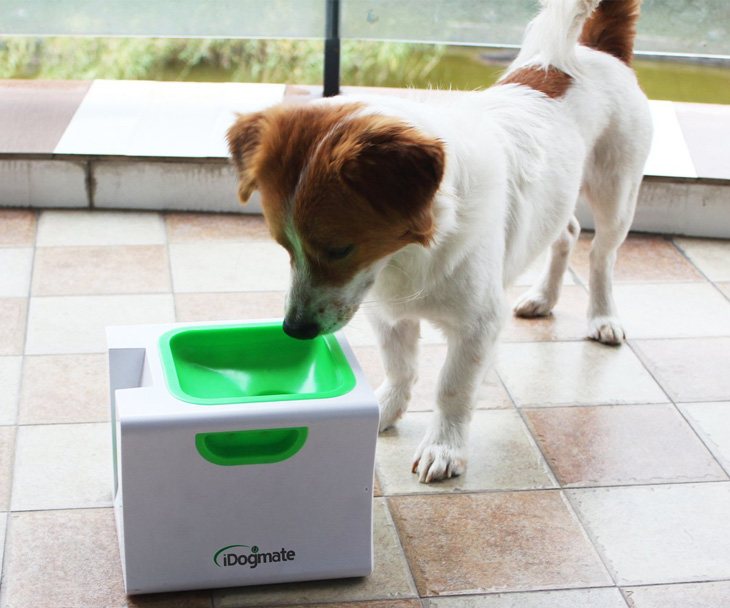 Are you an owner of an active dog? Do you like to play with him? Maybe you're just looking for an alternative way to play fetch with your pooch - one that will promote your hairy companion's active lifestyle? If you are, then you should definitely consider getting yourself a quality automatic ball launcher.

The active lifestyle isn't the only good thing that such a machine can bring. It can also stimulate the pup's mind, and promote his independence and the good behavior. But the primary selling point here is, of course, the sheer fun - dogs just love these creative toys!

But the only issue here is the fact that the options are, well, endless. There are dozens of different models on the market and finding out which one of them is actually worth the money can be pretty hard. That's why we decided to take a look at some features that make the iDogmate Mini one of the best choices - when compared to other launchers, this one is just stellar. Read on!

Who Was This Launcher Designed For?

Made by iDogmate, which is one of the newer manufacturers of pet-related products, this launcher is intended for pups that aren't heavier than 15 Kgs (33lbs). Owners of larger breeds of dogs should look into machines that are capable of throwing larger balls to a longer distance. If you allow your large dog to play with this particular launcher, you're in risk of having him choke on the small balls that it uses - and that's certainly something you don't want to happen. 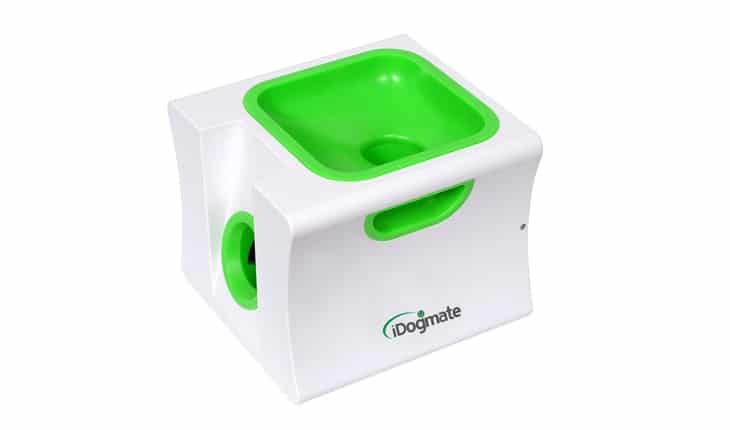 Fortunately, the same company also manufactures a larger model, with a review found here. Also, if you are interested in seeing reviews for dog ball launchers for larger dogs, you can check it out here!

Am I Getting Enough For The Price?

Since this is actually a pretty affordable model, one would expect that it comes in a boring, plain shipping box. We were surprised to see it arrive in a shiny, branded box, with all the necessary information written on its sides. Like with all other products of this company, the package sports an excellent design and gives the launcher a proper protection during the shipment.

Inside the box, you will find the following items:

One of the greatest things here is the fact that this launcher's design isn't only aesthetically pleasing - it's also user-friendly. The combination of the beautiful green and white colors is matched with some sleek curves and a sturdy frame, and all of this makes the model look very attractive.

The funnel area of this model has a pretty extensive surface, which makes putting the ball into the machine an easy task for the dogs. A wide funnel area is always a big plus in our book - and the one on this model definitely deserves some special praise, especially because we're talking about the "mini" model.

There are also two handles on both sides of the device, which are there to make relocating easier. They can come in quite handy and make the iDogmate Mini a very portable automatic dog launcher, so you shouldn't have any problems with moving it from your house to the yard and opposite.

The power switch, on the other hand, is located on the back of the launcher, just like the AC adapter port. There's also the on/off button next to the switch, which is intended for those users who plan to use it with the rechargeable batteries. Although this sounds a bit confusing, have no worries - it's very easy to distinguish these switches. 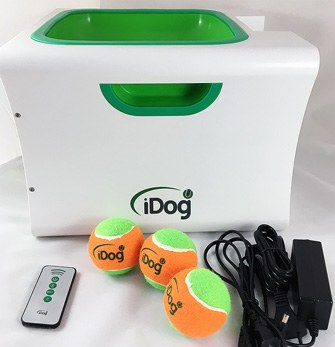 How Does It Work?

The front launcher uses a pair of spinning wheels, spinning them until they reach the designated speed. Once the ball is dropped into the launcher's funnel, it comes into contact with these wheels, and it gets immediately launched away from the device.

This system is very similar to those found on the models of other manufacturers, and it works very well.

In our opinion, the coolest feature of this model is the fact that it comes with a mini remote control. This little device will allow the dog owner to control the machine in a very easy and a convenient way, letting him turn the power on and off, adjust the distance, and reset the whole device.

With the remote control, you won't have to squat or kneel down every time you want to change the settings - you can relax in your garden furniture while your dog is having the time of his life!

Most of the other models that are currently on the market use six C-type batteries, and they're quite expensive. But with this model, you're getting rechargeable lithium-ion batteries that are capable of shooting over 1700 balls with one full charge, which is pretty impressive.

The iDogmate Mini removes the need to frequently change the batteries, which is guaranteed to save you a lot of money.

All in all, this is a user-friendly model that stands as an excellent choice for the owners of dogs that are still learning how to play the game of fetch. It features a beautiful design that's at the same time very functional and can shoot a ball to a distance that's far enough to provide your pooch with a lot of fun.

The thing that we especially liked here is the quality of the build - the iDogmate Mini has been manufactured from very durable materials, which makes the device almost invulnerable to breaking.

It's nice to have a launcher that's actually able to survive an occasional fall and still work correctly. And when it comes to sound, we have only words of praise - even though the machine sports a high-pitch whine when it's preparing to launch the ball, it still causes minimal disturbance (even indoors). 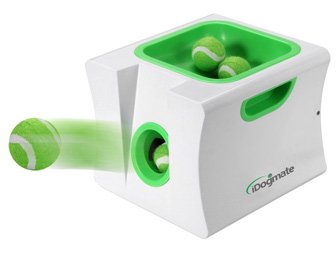 On Amazon and similar websites, this automatic ball launcher has mostly positive reviews, and the users are deeming it as something that offers good value for the price. They're praising the model for its functionality and durability, as well as for its beautiful design that's exciting for both kids and dogs. They're also saying that they're quite satisfied with the included rechargeable lithium batteries, as they can last a long time.

On the other hand, the users aren't particularly happy with the size of the included tennis balls. We can't take this as a serious flaw - the model is, after all, intended for the smaller breeds of dogs.

Take a look at the following user videos:

Overall, we're quite pleased with the user-friendliness, functionality, and durability of the iDogmate Mini. Like we said in the intro of this article, the features of this model are just stellar - it's one of the best mini launchers on today's market, and one that's certainly worth the money.