Owners of bigger dogs no longer need to despair, there is a new product from iFetch that is designed to use tennis size balls - meet i﻿F﻿etch Too!

As of now the iFetch﻿﻿﻿ ﻿Too is finally available on Amazon and we also suggest that you go and check out our updated review of the iFetch Too.

So many people welcomed the introduction of the original iFetch that was born out of a simple idea that became a global success product. The working principle is very simple – dogs can play on their own thanks to a small machine that launches mini size balls automatically. While great for smaller size pooches, owners of bigger breeds were wondering when can they get their hands on a bigger device.

After a positive reception of their original model, iFetch launched another Kickstarter campaign in order to fulfil requests of owners of big k9s. Out of 50,000 USD that was needed to begin production – more than 112,000 USD was successfully raised.

During the testing period before the release of the final product, iFetch Too prototype units were tested out with big dog breeds to great success.

iFetch Too Specifications and Price

Unlike the smaller, previous model, this one significantly grew in both size and weight. The dimensions are 13 inches in height, 14 inches in length and 14 inches in width. The weight is around 12 pounds which somewhat limits portability but doesn’t mean that it can’t be used indoors. This is still a universal dog ball launcher that can be used both in outdoor and indoor areas. 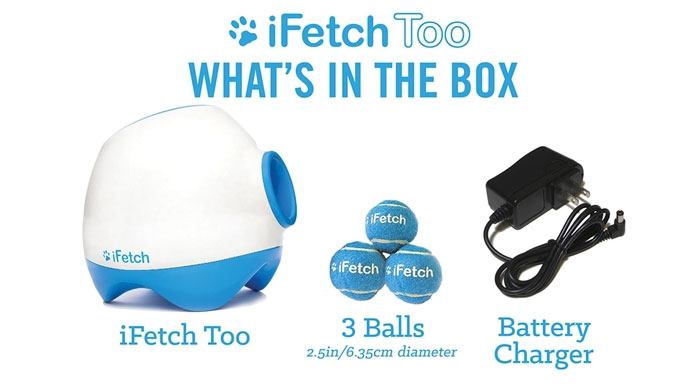 The difference between the two models doesn’t end there. Unlike the original smaller model, iFetch Too now uses a large capacity rechargeable battery which makes it easy to use almost anywhere. Since it uses smart components that are energy efficient, the battery lasts a long time on a single charge.

Bigger breeds of dogs do tend to slobber more so the balls can get ruggedized and more slippery which hinders flight performance and can even jam the launcher. That’s why iFetch Too features rubber covers on the launch wheels that prevent slippage no matter how much drool your playful dogs leave on the ball surface. Now, its motor is powerful enough to launch standard tennis size balls for 10, 25 all the way up to 40 feet far. It doesn’t matter if the balls get covered with drool or mud, the performance always remains the same.

Since this is a more feature packed model – the price is slightly increased too. The higher costs of production and the quality of bigger and more expensive components mean that more resources are spent which affects the end price a bit.

If you are looking for an automatic ball launcher for your big k9 then there is no better choice than iFetch Too. After the success of the original, smaller iFetch, even bigger dog breed owners can gift their pets with this great toy to enjoy as much as they like.

Share This
We use cookies to ensure that we give you the best experience on our website. If you continue to use this site we will assume that you are happy with it.Ok