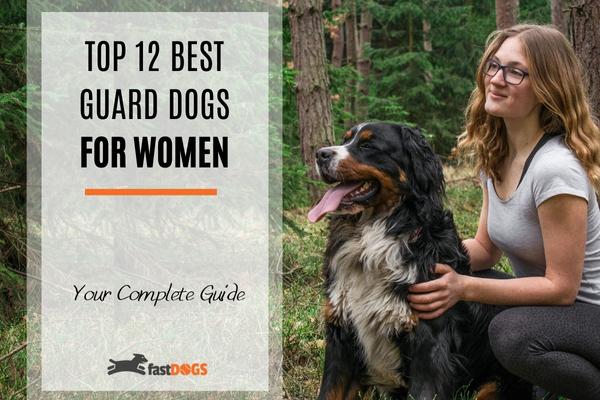 Are you considering the best guard dogs for women — if you're a single woman looking for personal security? Want the protection and company of a devoted guardian?

As a first step, think about it. A large dog breed with a thunderous bark is more likely to ward off thieves than a lap dog with a yappy voice — regardless of how well-intentioned the dog may be.

So, we’ve put together our favorite 12 good guard dogs for women who live alone.

The Best Protection Dogs for Women

It's time to consider what type of dog is for you. Finding your ideal canine companion shouldn't be too difficult because many breeds serve as both friends and trained protective dogs for single women.

The German Shepherd has to be the ultimate guard dog.  But it’s not surprising, given their ‘I-mean-business’ appearance, ability to learn commands swiftly, and confident character. They’re extremely devoted to their owners, live to please, and will do anything to safeguard their ‘pack.’ Hence, why they’re one of the best protection dogs for females.

However, Germans are extremely bright and high energy, thus requiring plenty of activity and sometimes a purpose in order to be happy. And, their guardian-istic side could lead them to become aggressive with strangers — so proper training is a must.

The Boxer breed is exuberant and boisterous, but can also be incredibly devoted and very cuddly.

They thrive in a family with a single female, where they could rule the roost with all the attention and playtime. With a temperament that equally appreciates playtime and lap time, this breed tends to quiet down considerably as they get older.

After some training, the Boxer can make a fantastic guard dog. These bow-wows are known for their silly personalities and high levels of intelligence mixed with their loyalty. Undoubtedly one of the protective dog breeds for a single woman, they’re frequently spotted guarding their female friends.

The Scottish Terrier is a cheerful, independent, and confident friend. Their aloofness toward outsiders makes them great watchdogs, and the Scottie's working demeanor has been characterized as efficient and determined.

This courageous and astute Scotsman prefers fast walks and energetic play. They also bark a lot — above average vocally, which is sufficient to keep away undesirable guests and warn women of impending threats in their homes.

In fact, they have a reputation for being hypoallergenic, so if you have allergies and need the best watch dog for single women, this could be a great little guardian.

A blend of sharp intelligence and pure devotion, that is, the Bernese Mountain Dog. One of the gentle giant breeds, the Bernese conveys the impression of ‘beware.’ Their sheer presence can intimidate, hence, they’re frequently avoided.

That said, despite their propensity to be standoffish among strangers, these dogs rarely display aggressive behavior. In fact, this breed has proven to be one of the best guard dog for single female. Fiercely faithful to their family,  the Bernese tend to form a tight bond with one special person — and will defend them if they feel threatened.

With their powerful physique and brawny features, Rottweilers have a sturdy appearance, and they’re committed to protecting the people they care for. This is one of the good guard dogs for women since they’re extremely strong, have severe biting strength, and can cause major harm while defending their owner.

This bow-wow is typically self-assured, and rather aloof with strangers, which makes them very daunting to be around. However, their character is totally different with their loved ones. Rottweilers are the perfect playmate and an affectionate canine companion.

The essence of the Jindo character is loyalty — typically toward one person in particular. This medium-sized dog, native to Korea, is a favorite with female owners. They make great apartment pooches since they’re clean and well-behaved.

Alert and fiercely protective of their own, Jindos need to be socialized from an early age. Aside from the fact they don’t get on with other dogs, they also don’t get on well with outsiders. Hence, they’re one of the best guard dogs for a single woman living on their own.

Dobermans are super vigilant and natural protectors, which is why they had to make our best guard dogs for women list. This breed is high-energy, so needs frequent exercise, but they’re also highly trainable.

At times Dobermans are perceived as aggressive, which while great for deterring intruders, you don’t want them to scare off welcomed visitors. So, take advantage of that quick-to-learn nature and teach them how to behave as early as possible.

The Akita makes one of the best protection dogs for females — because of their inherent desire to keep those near and dear safe, and their reserved attitude toward strangers. But, you’ll need to have a firm hand, they require an owner who they can respect as pack leader. So, may not be the best bow-wow for inexperienced pet mamas. What’s more, they aren’t suited to a multi-dog household.

That said, with appropriate training and socialization, their funny and caring side will shine through. Akitas truly flourish around ‘their’ humans, and will duly defend them.

This breed is fiercely protective and cautious around strangers. They’re one of the ideal breeds for women because they respect their owners. Komondorok require a steady master who can curb their tendency to dominate.

While not a couch potato, these dogs don’t demand too much exercise. However, their unique dread-lock-like coat does require extensive and particular care. Komondorok must be trained and obedient by the time they mature to prevent aggressive behavior toward other dogs.

The Chow Chow is the best protection dog for a woman that’s also downright cute, thanks to their teddy bear-like appearance. They aren't massive dogs either, which could appeal to petite wannabe dog moms.

Cautious around outsiders and incredibly alert, this breed will rapidly react if they feel someone or something isn’t welcome. The Chow Chow has the propensity to form close relationships, so ideal for ladies looking for a loyal canine companion. But they do have a double coat — be prepared for the regular grooming and shedding.

Classy, yet cool with strangers and watchful, don’t underestimate the Afghan Hound. They may appear to have lush, long silky hair — any woman would kill for — but they also have a big bark and aren’t afraid to use it. Plus, as a sighthound, they love to chase.

Understandably, regular brushing and bathing are necessary for this breed. And, when it comes to training, their independent nature means they’re a bit slow on the uptake — so patience is required.

As you can imagine, the Giant Schnauzer is a big bow-wow. This canine is the best guard dog for single female that’s different from the norm. Their trademark beard, bushy eyebrows, and hypoallergenic coat, isn’t stereotypical of a guard dog. Yet, the Giant is tremendously territorial and protective. Plus, considering their size, they’re more than capable of defending a damsel in distress.

Swift to suss out who’s friend or foe, the Giant Schnauzer truly adores their pet parent and sees protecting them as their duty. And, with a high level of energy, they’re a good match for women leading active lifestyles.

Despite their intimidating appearance, guard dogs are wonderful pets for women who need protection. Once they’re at ease and have gained your trust, they will make every effort to offer you the security and company of a faithful, yet defensive doggy, and best friend.

Think of these best guard dogs for women as your very own canine chaperone.

Can a Female Dog Be a Good Guard Dog?

Because of their motherly instincts and propensity to form close bonds with one particular person, female dogs make much better personal protectors than male dogs.

How Effective Are Guard Dogs?

They’re genuinely able to defend you from an intruder. Additionally, guard dogs are frequently more successful at alerting you to an intruder than hi-tech alarm systems. A guard dog will warn you long before the intruder enters your home, in contrast to an alarm system, which will do so when they enter.

What Is the Smartest Guard Dog?

Compact, robust, brave, and fast, the Doberman is one of the best guard dog breeds. They’re regarded as the fifth smartest dog breed in the world and are devoted to guarding their owners, alerting them at all times. Similarly, Dobermans bark a lot.

Can Guard Dogs Be Pets?

The opposite of what you may anticipate is true — a guard dog is really more affectionate and dependable than the usual dog. They're actually wonderful choices for family pets! Even though they’re working to keep their owners safe, protection dogs may be just as entertaining and lovable as any other breed.

What Breed of Dog Will Protect You Without Training?

What Are the Top 3 Guard Dogs?

These are the Top 3 Guard Dogs:

What Is the Best Beginner Guard Dog?

German Shepherds make the finest guard dogs for first-time owners because of their disposition. They’re simple to train due to their great intelligence, but thanks to their protective instinct, they will need constant monitoring.

We use cookies to ensure that we give you the best experience on our website. If you continue to use this site we will assume that you are happy with it.Ok