iFetch Origins Story – How It Was Created 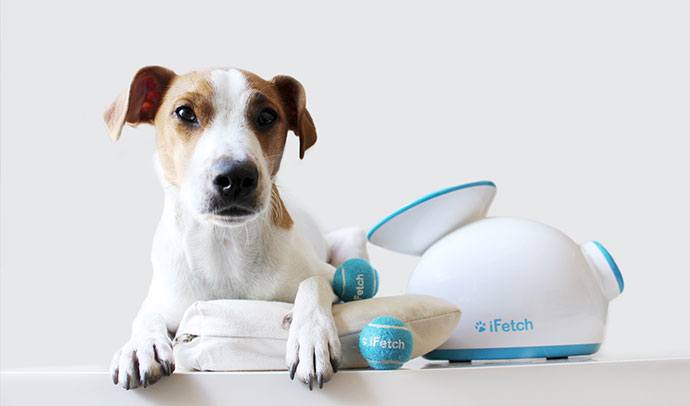 The story of the creation of one of the most innovative and best selling dog toy is a story about materialising even the simplest ideas for the benefits of the many. For those of you who aren’t aware, the iFetch company is a family driven business. It all first started with a simple thought that spawned an idea which motivated a young boy and his grandfather into making one of the best toys for pets in the world.

It all began with a poodle that was eager to play while its owner, Grant Hamill, who was busy doing his homework. The teen didn’t notice his doggie at first but he became more and more distracted by the doggy’s insistence to play fetch together, as they usually do. It was in those moments that Grant had an afterthought about an automatic ball launcher that would keep his k9 happy playing by itself even when he was too busy. It was Grant’s grandfather, Denny who realised the true genius of this simple concept that made possible for us to have so many great iFetch products today!

Having just a great idea doesn’t mean that it will ever become a reality without dedication, perseverance and resources to make it into something real. Both Grand and Denny Hamill knew that they have a nice concept in their minds but they need resources to make the iFetch a finished product. The name of the brand was their idea too since it symbolises the possibility that the pets can play on their own. But naming was easy. Making the machine was difficult for a teen boy and his granddad. Soon they hired professionals that would work on the proof of concept design that would eventually become their first family business product.

With the first couple of prototypes ready after a month of designing and manufacturing, in 2013 the Hamill’s turned to the largest crowdfunding platform - Kickstarter to raise funds for making their dream a reality. Needless to say, the original Kickstarter campaign was a complete success since the people really loved the idea of having an iFetch for their pets. Even the customer reviews of the finished product showed how great the whole concept was in practice. This positive feedback boosted the toy into a bestselling list in a matter of months upon reaching wide market availability in 2014.

The online dog focused websites, magazines and printed paper publications also loved it and it got great review marks on independent tests by professional reviewers. With excellent quality, great design and an affordable price, for such an innovative product, success was inevitable and well deserved!

Since it is first considered as an online-only selling product, buying iFetch nowadays is possible even in brick and mortar pet stores. Your best bet is still looking for it in online shops and big retail sites like Amazon which was its original home store when it first launched. You can read through very positive customer reviews on Amazon to find out the first-hand experience from very satisfied owners. There are always discounts and price drops if you want to buy your own iFetch and experience and witness for yourself the happiness of your doggie when it starts playing with it. It will become its favourite toy for sure.

This inspiring story of a mere dream becoming a reality that is now making so many dogs around the world happy shows us how a simple idea improves and moves the world. The iFetch is a family company that brought us and our pets so much fun and so many joyful moments and for that, we are very thankful.

Looking for more information about the products? Check out our in-depth iFetch review and iFetch Too review.

If you want to check other automatic dog ball launchers be sure to check out GoDogG﻿o too!